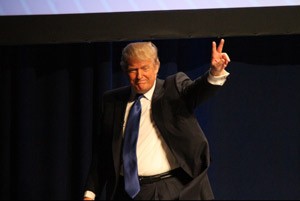 Is America committing suicide? That is the thought swirling around the darkest recesses of my mind ever since Trump got elected. “Is America the Next Atlantic City?” is another. Though both strong contenders for my attention, they differ. The Atlantic reference suggests that something happened to the New Jersey town, which, in turn, implies that its townspeople were victims. The suicide version suggests a self-inflicted injury.

If there is any indication to the direction the nation is taking, the first weeks of the Trump presidency have pointed towards a bumpy ride. Executive orders are signed faster than they can be implemented. President Trump vows to gut the government, crack down on illegal emigrants while attacking the media for being “the enemy of the people.” Chaos paves the way. Radical statements can be an effective strategy during an electoral campaign to rally supporters, but to govern by them inevitably raises a déja-vu specter. America seems on its way to go down the Atlantic City route.

Unlike Trump’s new America, Atlantic City started as a fairytale. Once upon a time an ambitious young Trump arrived in town and said he would create tons of jobs and build a casino so big that it would become a beacon for many to come. Financial experts told him that the “vision” was unsustainable. He persisted. The venture culminated in such an apocalyptic bankruptcy that the too-big-to-fail developer had to be kept on financial respirator, leaving a smoldering trail for years to come simmering behind. No one got the promised happily-ever-after ending.

Trump is now at the helm of the ultimate project, America.Inc. Whether he got there by selling the same emblazoned “Make America Great Again” dream to its most destitute population is irrelevant. What matters is the position he took: the messianic savior. That he, and only he, could fix America from its own “carnage.” Although it is uncertain what “carnage” he is referring to (given that the economy has never been so robust), in the light of the Atlantic City debacle, one must ponder if voters were not seduced by Trump’s glitzy discourses, and ignoring by electing him they were espousing a form of socio-economic suicide. Great dreams allure a contagious casino mentality. Fortunes can be made overnight. They still rely however on randomness as the last chance to overcome adversity, even if the belief provides a short-term relief. Betting on Trump is a sure bet, we are told.

Within the context of a Christian tradition with a strong evangelical agenda, a call for its population’s suicide would make sense. Wouldn’t its members welcome the end of the world if salvation frees them from their own post-mortem analysis? The scriptures, we are told, will reveal its members the second coming, but only after the apocalypse. Temptation to rush the process could be inspiring. So why not elect a man who promises to “drain the swamp” and tear down all aspects of a working society? But spiritual suicide is the one I have in mind.

But America’s suicide is not a metaphor either. Though Trump’s well-commented-upon pathological traits could be blamed: his delusion of grandeur and profound narcissism. Nor is his temperament an issue here: his impatience, impulsiveness and hypersensitivity. More relevant to the suicide case is his jarring ignorance of cultural, political and worldly affairs. The fact he never reads and yet claims to know more than anyone else is problematic and raises the issue about knowledge. Are his ideas for America merely opinions caught in the glare of TV stations? Where do they come from if not? At the moment, Trump’s desire to bankrupt the American government feels more like an enforced suicide.

No airline would consider an individual plucked from the street to pilot a passenger-filled 787, without prior training. Yet, a man with no prior training was put in the pilot seat to fly the America plane. An election based on the assumption that the skill sets to run a real-estate so-called “empire” transfer logically to a country. Are the passengers better off having a non-pilot flying their plane? Time will tell. No sane person (that I know of) would get into that plane, however short the trip, if they knew about the pilot’s lack of competence. Yet, the dictum “he’s not a politician” somehow when applied to the presidential function works as an advantage.

Unless it is a form of suicide that eludes me, to fly the America plane the captain should, at a minimum, be able to understand some the dashboard’s instruments. Not just the economic ones, but also the diplomatic, judicial, environmental, ethical, educational, etc. all that constitutes the finely-tuned USA machine. President Trump falls short on all counts in staggering ways. Not only he has no interest in the instruments but also demands to have them removed from the plane. He wants to free the banking system again from regulations, ax the Dodd-Frank buffers, dismantle a restraining EPA, giving permission to pollute streams, repeal the Obamacare (the list goes on) without ever asking himself why these regulations were implemented in the first place. Regulations are viewed as impediments to job creation. Is the job-for-all Atlantic City vision being implemented to the American economy?

The same distortion seems to be taking place. The belief that America is a corporation. It is not. America is a country with states, three branches of power, with federal, state and local authorities, supervising a vast range of communities. Within these communities, business takes place. But business is only one aspect of the country. Running a country by putting business interests first with the understanding that businesses alone can fix broken communities is a serious delusion. History shows up that it has never been the case. Businesses destroy communities.

The Industrial Revolution did not provide workers with wealth. On the contrary, it made them more destitute. Workers worked longer hours for less money, because of stiff competition. Living and working conditions were appalling, insalubrious. Mortality was high. Workers had no power. 120 years after the beginning of the Industrial Revolution, little had changed. Take a look at Bangladesh today. It is a picture of us 100 years ago. This is what capitalism looks like without protections and regulations.

It took the butchery of WWI for the process to reverse. Workers began to unionize, mobilize themselves into organizations and communities. Governments along with politicians were forced to recognize their powers. This mobilization from the bottom up called for a better repartition of wealth. The standard of living we enjoy today would never have happened otherwise. A strong government working for the peoples with a robust legal system to protect the peoples from the abuses of both businesses and government is paramount to guarantee equality—a fair share of the pie. Trump’s dismissal of this fact is like flying the America plane with a naked dashboard.

The Great Depression came about because of a lack of banking regulations. The Great Depression did not however manage to obliterate unions and interest groups. They throve for even better protections. The Great Recession was also the fruit of a deregulated financial market. It is shocking to learn that an expert like Alan Greenspan could naively believe that the market would take care of itself. The market works for its own interests. The market will never be on the side of the peoples. It is indifferent to them. Peoples are its collateral damage.

Herein lies the great paradox at the heart of Trump’s course of action. Destitute voters are made to believe that a government defending their interests is responsible for their plights. Strangely, each time social-economic disruptions arise, blames and accusatory fingers point at government and legislation, never at the culprits who created the mess. Focus is on symptoms and never on causes. How did we get into this ideological twist when businesses’ main concerns are to drive down wages or move jobs abroad to cut their expenses and maximize profits? How could blue-collar workers believe that cutting taxes for the 1% and corporations, vowing to erase 70 % of regulations protecting them, taking away their health insurance, were good measures for them? Doesn’t this sound like asking workers to commit suicide to prove the goodness of the market economy? Or like selling the Atlantic City casino mindset on the promise that when the market is strong, the trickle-down society will be flooded with jobs?

Something does not align with the argument. There is a great deal of delusion floating in the air. Why would Trump care so much about the plight of American workers in the first place? Running a government implies servicing the peoples. Being a president demands a no self-interest stance. Trump is a businessman. Businessmen always put their self-interest first. They are against obstacles. To this day, President Trump is unable to give a speech without bragging about himself and acknowledging the existence of anyone else but himself. How is he going to make “America Great” when he has surrounded himself with a team of bankers and billionaires, who have no experience in the functioning of a government or public offices, and who mirror his mindset? How great America is going to be when his new secretaries are put at the head of agencies with the mission to dismantle them?

Demonizing state and federal agencies for their own failings will not solve the unemployment problems. Government and regulations exist to protect the peoples. The promise to get rid of up “75%” of regulations if not more,” would make the American society roll back decades of social and environmental progress. Check and balance mechanisms were put in place, precisely, to prevent the society from imploding through the maneuvers of unregulated industries. Getting rid of regulations will once again create a deflation of wages and more employment, since workers will be replaced by automation. Invariably, deregulations, in the name of efficiency, lead to bigger monopoly, less competition, and higher prices. Trump’s program will only increase disparities among workers and the wealthy. Trump’s vision of America is Atlantic City redux. A brash gamble that opens the door wide to sheer plutocracy with unprecedented cronyism. And we all know that this sort of fable never ends well.