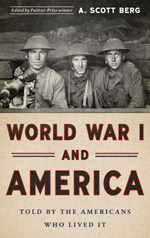 “World War I and America: Told by the American Who Lived It,” edited by A. Scott Berg

Besides the inviting silky quality of the paper, this volume from the Library of America offers an impressive collection of articles, essays, personal stories, and declassified documents from WWI, from both participants and observers. The volume aims at providing a never-before kaleidoscope view of the “never again” war, that is the French-German butchery which supposedly was going to be the war that ends all wars.

I can only imagine the headaches A. Scott Berg, the supreme editor of the book, must have experienced to decide what to include and exclude. The wealth of the materials is just staggering, spanning the beginning of the war to the ratification of the infamous “Versailles Treaty.” Lots of names will be recognizable to the modern readers, Edith Wharton, John Reed (who proceeded to go to Russia), Willa Cather, W.E.B Dubois, and of course Woodrow Wilson. But there are many others to whom history has not been so kind and who nonetheless made important contributions. Charles Lauriat is one of them. His telling of the sinking of the “Lusitania” reads like a novel, a first direct personal account of the tragedy during the swift German Torpedo attack. The sinking of the luxury liner was pivotal, for it signaled an important escalation towards the eventual US entry into the WWI conflict in 1917. The major lessons to be learned here come from the abundance of testimonies left to us as vestiges of the past, from which we are still trying to make sense. Given that in our new millennial age the past seems to carry less and less weight, the publication of this volume offers an in-depth ballast to anchor ourselves with the understanding that where we stand today is not so random. Especially in the light of the upcoming 100-year anniversary. Time for reflection is never wasted.